« This is $1 million of the drug Eyelea | Main | "Social determinants of health" are macroeconomic, not micro »

Three cuban professors define socialism (short videos), and other notes from a visit to Havana

My wife Melanie and I enjoy learning things while traveling. For example we had some great private tours from Ph.D.'s through Context Travel in Rome last year. I can't express how much the non-stop lecturing and question-answering added to our visit.

This year, on a lark, we booked a cruise (our first - it was actually OK), and decided on one that goes to Havana for two days. In the spirit of learning, we bought a few "experiences" through Airbnb, rather than just doing the cruise ship tours.

Our first tour was with Leo, an economist, and Cesar, a historian. We went through the history of Cuba, the revolutions, the complicated and difficult relationship with the USA, the partnership with the USSR, and the difficult times when the USSR fell apart (the "Special Period" of austerity). Again, I can't express how enriching these hours were. For something to share with you, I made two brief videos, asking our hosts to define "socialism":

At the end of the tour, I told Leo I wanted to learn about central planning, and he said, "I can get you a visit with the University's chief of central planning tonight."

Another few hours of fascinating conversation. I asked him the same question about socialism:

What really struck me, talking to these guys, is how much what they said aligns with what I have heard/read economists say in the USA. For example, they understand that a planned economy cannot satisfy everyone's needs, and that a separate economy, using market forces, will occur - whether explicitly or hidden (i.e.,black market). They acknowledge that the tradeoff of a rigidly planned economy is lack of efficiency. For example, for an entire month last year, there was no toilet paper in Cuba. (Of course, part of the difficulty is the trade embargoes, which make it difficult to find trading partners.)

The one difference in their thought was the primacy of the goal of making sure everyone is OK, that everyone benefits in some way from changes. Especially, as they integrate into the world economy, they are intent on ensuring that no one gets hurt. They seek to protect the poorest. "In Cuba, it is difficult to die" - you will not starve, you will have a place to live, you will have health care. I swear you could feel it on the street, even in the poorest neighborhoods - I never felt that desperate anger you can feel sometimes in the USA. There was resentment of inequality, to be sure, but never that sense of "it's me against you."

We also spent some time in the Museum of the Revolution, documenting the events of the late 1950s and early 1960s. It's fascinating that the revolution was not intended to create a socialist state, but to push away USA-domination. The revolution was "as green as a palm leaf," Castro said - i.e., not "red". The embrace of socialism and the alliance with the USSR came a few years later, after the Bay of Pigs cemented Cuba's opinion that the USA was not to be trusted. They had to turn to someone else for help, and there weren't too many options then. 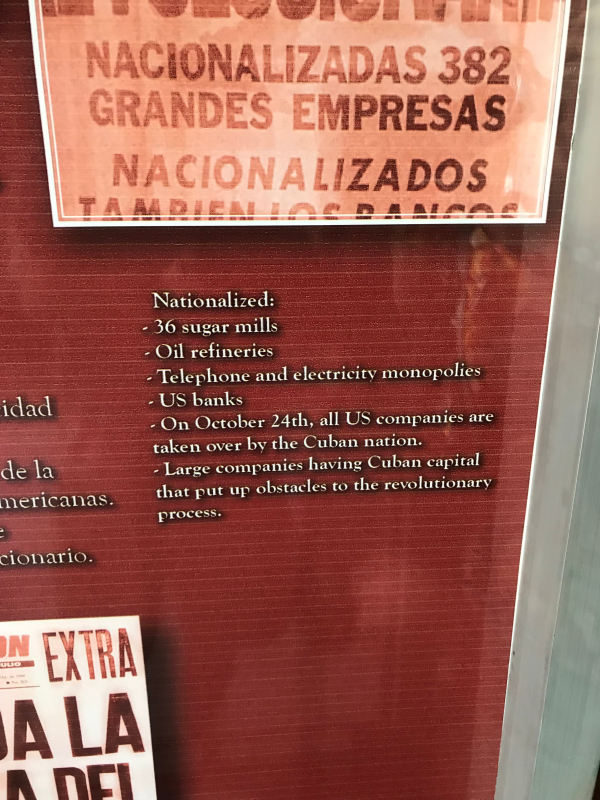 At the art museum (Museo de Bellas Artes Cubano) you could see politics everywhere - anti-capitalist most notably. Some of it was a bit heavy-handed, as in "Heaven and Earth" by Marcelo Pogolotti, 1934: 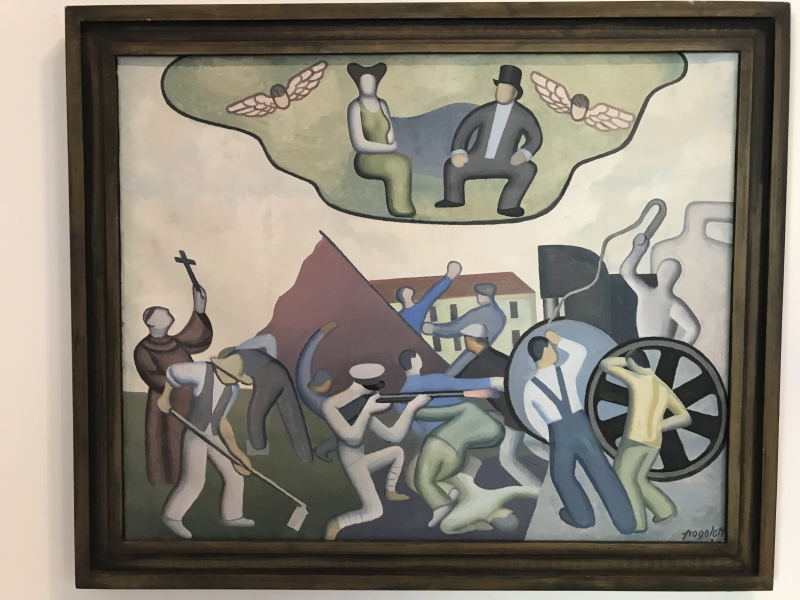 Havana itself was tremendously safe, but it looked like a war zone. Buildings falling apart, streets with huge holes, broken down cars. No capital. Here's a banyan tree growing on top of a building: 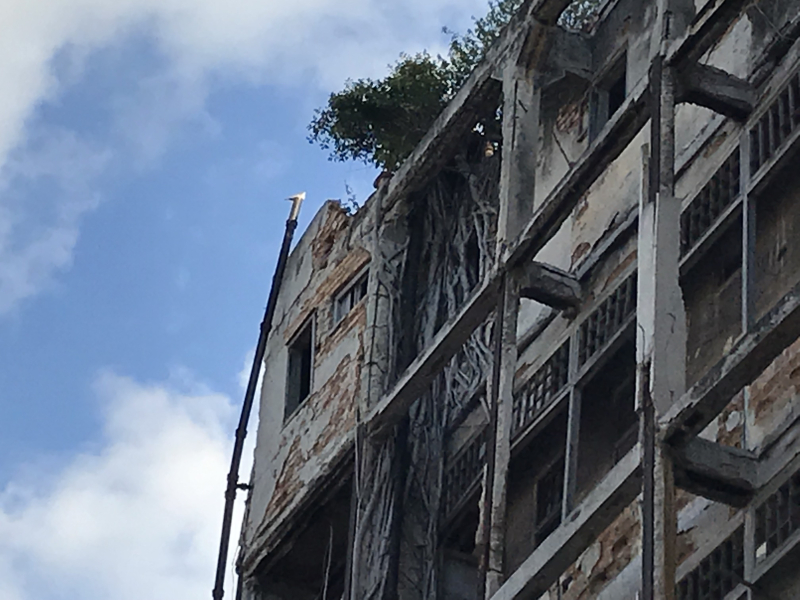 Thank you Mike!
This is a serious piece about our Country. You have got the very essentials!
It was a real pleasure to all of us from our Knocking on Cuba team, to open a door and give you a hand to unravel Cuba's complexities.
Thanks againg for sharing this at our Facebook page #knockingoncuba. See you next time and try to come then with more time.
Greetings..
Oscar

The comments to this entry are closed.